The 100th anniversary of the armistice was a busy week for Alan. It started with an appearance at the Denny Civic Theatre in Dumbarton on 3rd November where Alan was joined on stage by Kevin McLean on the pipes. Speaking to the Dumbarton Reporter, organiser Mary Burch of the Skylark Trust, commented “We wanted the concert to be memorable and we succeeded. Alan finished the show for us and performed three songs. The audience were awestruck by the finale, it was a wonderful end.”

During the week Alan spent time at Dreghorn Barracks, Edinburgh with The Band of the Royal Regiment of Scotland, under the superb direction of Major James Marshal, arranging and rehearsing songs for Legion Scotland’s Concert of Remembrance. The concert took place in the Assembly Rooms Edinburgh with a superb line up of artists including Isla St Clair, Amy Hawthorn, Stuart McLean, Erin Ritchie and Ibiyemi Osinaike. The hall was filled with emotional and uplifting music from the massed bands of The Band of the Royal Regiment of Scotland, The Band of HM Royal Marines Scotland and The Royal Air Force Central Scotland Pipes and Drums.

Alan performed Jimmy’s Song with the band and the excellent Erin Ritchie on pipes. He was then joined on stage by the legendary Isla St Clair. The two have been good friends since working together in Passchendaele. (Isla had previously recorded On The Road To Passchendaele) Together they sang a duet of A Place In My Heart, from Alan’s recent album Reflections.

As soon as the show had ended Alan left Edinburgh and headed to Passchendaele to take part in the official ceremony to mark the armistice weekend on Saturday 10th, performing On The Road to Passchendaele at Crest Farm Memorial, followed by a torchlight procession to Passchendaele Church where, in the town square, he performed A Place in my Heart.

On Sunday 11th, in association with Field Marshal Haig’s Own Pipes and Drums, Alan took part in the Battle’s Over event, playing the tune The Battle’s Over on the pipes at 6am local time at the Scottish Memorial Frezenberg, Flanders which stands on Passchendaele Ridge where the Scottish soldiers advanced. Individual pipers from the band played at different locations throughout Flanders. Since Flanders is one hour ahead of Scotland, Alan continued to play the tune at six different locations between 6am Belgian time and 6am UK time, calling also at the Irish Memorial Haezeweidstraat, New Zealand Memorial Graventafel, Memorial of 48th Highlanders of Canada and the Brooding Soldier of St Julien. Then, at 6am UK time Alan played Battle’s Over at the graveside of Jimmy Speirs, the subject of his “Jimmy’s Song”. He has previously sung the song at Jimmy’s graveside on several occasions but never there on the pipes – so took the opportunity to play that too.

Just before 11am on the 11th Alan was the lone piper in Tyne Cott Cemetery near Passchendaele, the biggest Commonwealth War Graves Commission in the world by number of fallen. He played the lament “Floors of the Forest” and then, after the minute’s silence – The Battle’s Over. A very moving experience.

After the event a kind stranger from England approached Alan with an old bottle of Dimple Haig whisky. Explaining that the bottle had belonged to his grandfather and was opened in his memory, Alan gratefully accepted a “wee dram”. Unfortunately, in the busy cemetery with many people approaching Alan we didn’t get the gentleman’s name so if you recognise him please contact us. 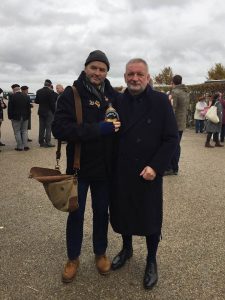 At 2pm Alan took part in the official ceremony at Black Watch Corner along with Field Marshal Haig’s Own Pipes and Drums and the Dartford Choir.