Alan Brydon is a musician and songwriter from Hawick in Scotland’s historic Borderland. His songs have become popular internationally through internet and social media as well as recordings by various artists and bands. Alan writes in a range of styles, from passionate anthemic works and historical ballads to folk stories, crossover numbers and quirky refrains. 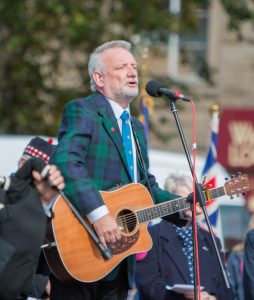 Following a visit to the war graves in 2004, Alan composed the song Calling Doon The Line to honour the role of the pipers in WW1. This was subsequently adopted as the fund-raising anthem for a new monument to fallen Scots in Passchendaele and led to Alan being commissioned along with Major (RTD) Gavin Stoddart MBE, BEM, to compose a new song On the Road to Passchendaele, to mark the unveiling of the monument. The song has since become an anthem of remembrance internationally and is frequently performed by a huge variety of artists and organisations including individuals, folk bands, choirs, pipe bands, military bands, flute bands and orchestras at a wide range of events from concerts, schools, remembrance services and military tattoos internationally.

Alan’s songs have also been recorded by a range of artists including Isla St Clair, North Sea Gas and the Band of the Scots Guards.

He has co-written two historical stage musicals with Ian Landles; 1514 The Musical and A Reiver’s Moon which has recently enjoyed a record-breaking fourth successful run.

Alan has also written a number of local songs for his home town of Hawick and neighbouring towns of Jedburgh and Langholm as well as the official song of Edinburgh’s Riding of the Marches – Auld Edinburgh Town and “Always a Borderer” about the King’s Own Scottish Borderers and commissioned by the KOSB Association.

Alan’s new Album; Reflections was released September 2018 and is available on cd here as well as on all major download and streaming sites.