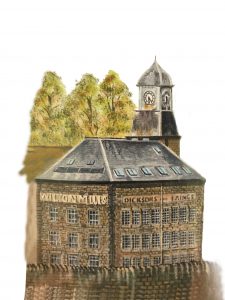 When I left school I took a job as a carding engineer in a local mill.  Most mills in the town produced the lambswool and cashmere knitwear that Hawick is famous for. Wilson & Glenny however was a fully vertical Tweed mill, taking scoured wool and carrying out the entire process from fibre to fine quality cloth. Dyeing, Blending, Teasing, Oiling, Carding, Spinning, Winding, Twisting, Warping, Weaving, finishing and mending. The sights, smells and sounds of a mill have always fascinated me.

On my first day I was met by the Carding Engineer, Rob Chapman and he showed me round the mill. I wasn’t sure I would stick it, it was noisy, and a bit overwhelming. I have good memories of the mill and its colourful characters and recall being drawn to the rhythm of the various machines. Sadly, like many mills, Wilson and Glenny shut down, but the grounding and training I received there set me up well for the years ahead.

Thanks to Ian Landles and Judith Murray who were seeking textile terms and words for The Textile Tower House, museum in Hawick, a line from the song is engraved in the pavement in front of what was the ancient Tower, a very prominent place in the town.

I wouldn’t swop it for a star on a Hollywood sidewalk!

The mechanical sound you hear on the recording blended in with percussion, is of an actual old weaving loom. The older looms had structure in the rhythm. Nowadays weaving looms are so fast that the rhythm is more like a snare drum roll.

A wee reflection of my own past and also reflecting the amazing high-quality knitwear and cloth that is still produced in the town to this day. If the label says “Made in Hawick” you can be assured of the very highest quality. The local people who craft the garments and cloth would never stand for anything less.

Young and green, not quite sixteen

O’ School I’d had my fill

I’d tried my hand in a Rock n Roll band

But instead I was heading for the mill

They said we’ve got a job for you

Maybe you can even make it a career

And they offered me an apprenticeship

As a carding engineer

Well I took the job and I worked with Rob

He stood about 6 feet tall

He showed me round the factory

I thought I’d hate it all

But the chains and wheels had a musical feel

And I thought it sounded grand

And before too long I was singing along

With an oil can in my hand

As the shuttle gets whacked

And it flies across the loom

And the weft gets tucked

With a Yuka Tucka Tuck

To the drone of the carding room

With the rattle of the spools

And the dancing of the mules

That had never had a day stood still

For years and years I’ve had music in my ears

From the rhythm of the old wool mill

For years and years I’ve had music in my ears

From the rhythm of the old wool mill

Well working on a textile floor

There’s always jobs to do

And if you ever do get bored

They’ll give you something new

Or even piecing in

And if you whistle while you work

You’ll hear the mill join in

And that was the case with the cards

I had never any peace from the oil and the grease

That was splattering all over the guards

So to keep them clean, I asked for Windolene

So I could see the gubbings inside

But the manager was a Yorkshire lad

He was tight as a duck’s backside

Well the textile trade has moved away

And it’s done so year on year

In Yorkshire and the Borderland

Many mills have disappeared

But forevermore, there’ll be a core

For we might have lost some looms and mules

But we’ve never lost our heart