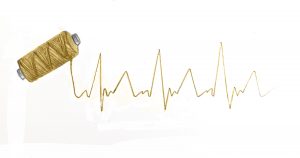 I have huge respect for Derek Robertson who has relentlessly researched WW1 from the particular perspective of Scots, Borderers and Hawick Men lost in the war. He is the author of the encyclopaedic Hawick and the Great War to be published in November 2018, 100 years from the armistice. Derek and I often speak about “The Golden Thread”.  It is that gut feeling, that nagging thought that suddenly comes to you that leads you to something you have been searching for. A missing link, a soldier’s record, a chance remark, a clue, a revelation, we have both experienced startling instances of this, sometimes holding the same thread.

It’s like a reflection from the past, an echo, a voice, a hand reaching out to guide you. I know most folk will say they are coincidences, but all I can say to that is we have been very fortunate to have experienced so many coincidences.

This is one of those songs that just flowed out. In fact, the spark came to me as I walked from my car at Edinburgh airport on the way to a gig in Belfast. It was finished on the flight on the way over.

The golden thread is not simply in connection to war stories. Sometimes life provides its guides. If you take the time to reflect and your mind is calm and open; positive thoughts find their way in.

When you feel the glimmer of the Golden Thread, grasp it tightly and hang on.

You never know where it will lead you.

There’s a golden thread that binds our souls and minds

And it winds around our hearts in space and time

When you can sense a guide

From beyond the dark divide

Someone’s on the other side

Is holding us together

My mind was led

So many tears were shed

The links to life were broken

And spun the golden thread

When it feels like life has nothing left to say

When your vision’s overcast

Missing fragments of the past

Manifest themselves in unexpected ways

You don’t need ears to hear the thoughts behind

Nor eyes to see the spark You seek to find

But still a light can shine

When the golden thread unwinds

All it needs is love and open minds

When every twist and turn’s another question

Someone’s speaking clearly though is silence

The golden thread is calling down the line