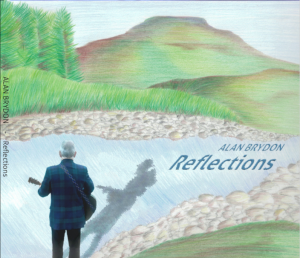 This is the tune I walked my daughter Cheryl down the aisle to. It’s remarkable that in the space of a few weeks, it went from not existing at all, to a special wedding tune, to the title track of the album.

The tune begins with the same chord as my song “He’s my Man” from the musical A Reiver’s Moon, which Cheryl was first to record, leading to her appearance in the TV series “Reivers”. Yet another reflection.

Kevin McLean (Falkirk) was the first person to play this in public. He joined me for an Ancre Somme Association Scotland event at South Queensferry on 15th September 2018 and played On The Road to Passchendaele (along with young Ross Courtney from Uphill Primary School who helped me sing it!) and Jimmy’s Song (as well as the lament Floors O’ the Forest after I sang Calling Doon the Line).

When someone requested Reflections, which had only recently been released, Kevin learned it in minutes and played it in front of the majestic Forth Railway Bridge. Very impressive Kevin, thanks again.

It’s also a tune to reflect on special times; times gone by, times enjoyed with family, friends and memories of special people.

A tune to remember others by.

How reflective is that?