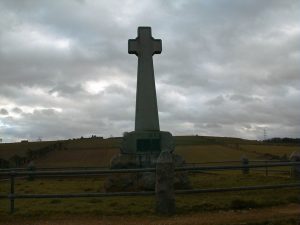 In 1513 one of the bloodiest battles between England and Scotland took place at Flodden close to the border. It was during the reign of a young King Henry VIII who was intent on marching on France. The French were allied to Scotland under The Auld Alliance, each sworn to come to the aid of the other. Henry knew this of course and sent an army northward under the Earl of Surrey to engage the Scots and ensure they had enough to deal with at home.

King James of Scotland decreed that all men between the ages of 16 and 60 should muster and march against the advancing foe. The armies met on Flodden Field.

More than 10,000 Scotsmen died in the space of two and a half hours. The Scottish King, most of his nobles and ordinary men from all over Scotland. It was the origin of the song “Floors O’ The Forest,” still played to this day on the pipes as a lament.

Growing up in Hawick, we are all acutely aware of the after effects of Flodden. The following year in 1514 a raiding party set forth over the border plundering, murdering, raping and burning as they went, leaving towns villages and crops in ashes. One such raiding party camped close to the town near a spot called Hornshole. The menfolk slain at Flodden, it fell upon the young lads (Callants) of the town to defend the town and its people. They went by stealth, engaged and slew the raiders, and rode triumphantly back into town with their captured flag, an act of defence that is commemorated annually to this day (The subject matter of the song Bonnie Banner Blue).

One Call of a King song was originally written to mark 500 years of the Battle of Flodden and was first performed at a special concert in Hawick Town Hall, with Hawick Pipe Band. It later became a key number in the stage musical 1514 The Musical – co-written with Ian Landles.

The singers on the recording were cast members. Our friend Ronnie Nichol was a key member of the cast and was recorded in the chorus of the song on the official CD soundtrack of the musical. Ronnie has since passed away prematurely.

When I recorded this version, I could not bring myself to remove Ronnie’s voice from the chorus and so contacted his brother Lyndsay, telling him that I wanted to keep him in the chorus of the new recording and asking if the family be ok with that. His reply brought tears and a smile. I won’t publish what he said but basically I would be in deep trouble if I didn’t keep him in!

Over the course of the recording of this track I managed to get most of my family to come into the studio to sing on the chorus. Four generations in fact, from my parents to my grandsons, one of whom, James is the bairn crying at the end, reflective of a grieving town after Flodden.

The song reflects the Battle of Flodden, all those who fell and all those who suffered at their loss. And it’s dedicated to Big Ronnie.

A king and his nobles prepared to advance

In a shown of defiance

In their auld alliance

Stood firm in their stance

Neither afraid of the prospect of war

Common defence of our borders and shores

One call of a king

One cry of a nation

One thousand beats on a drum

Mustered at Durham the beacons ablaze

With an eye on the foe

His forces to show

With orders from Henry an army obeys

Amassing the men and the means to comply

Arrows and muskets and canon forbye

Face off at flodden the threat to rescind

Five hundred banners would fly on the wind

With no truce to be found each stood their ground

Everyman poised for the fray to begin

Suddenly shadows of death in the sky, as

Each side let arrow and cannonball fly

Two hours of fighting and most men were dead

Everything silent the battlefield red, with the

Blood of a king, his

Nobles and soldiers, the

Lambs had been led

Ten thousand widows to wail of the fallen, of