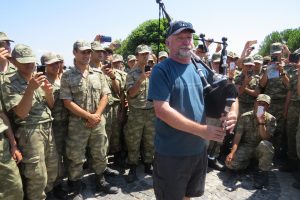 In 2015 I travelled to Galipolli with a group from our town, again led by Ian Landles and Derek Robertson and guided by author Peter Hart. It had been 100 years since the local Kings Own Scottish Borderers had advanced in battle, securing ground but at high cost of life.

I had a strange uneasy feeling in Gallipoli. When visiting war graves and battlefields in France and Flanders there is always a sense, despite the high loss, that the soldiers were there to defend our freedom against an advancing, invading foe.

You don’t get that at Gallipoli. We invaded them. Young Winston Churchill’s idea to secure the supply routes to Russia might have been well intended but it was ill thought out. At the time, the Ottoman Empire was not an enemy, they hadn’t declared sides, they had purchased war ships from us and the delivery was revoked at the outbreak of war. Understandably they were not happy about this.

It seemed that there was an assumption that the Turks were somehow unprepared, disorganised and somewhat inferior as soldiers. That turned out not to be the case. The Turks were organised, they were ready, they were well equipped and importantly, they held the high ground. They were defending their land.

Their leader Mostafa Kamal was very capable and his men would follow him to hell. Unfortunately, for both sides, that’s what Gallipoli turned out to be. Brave, brave men of many nations piled ashore under a barrage of shells and gunfire. That they gained any ground at all was remarkable but they advanced up the hills relentlessly and secured positions in trenches on the higher ground. The trenches of each side were, in places, only meters apart.

It was hell on Earth, blisteringly hot at peak and extremely cold at the other end of the spectrum. To make matters worse an outbreak of dysentery wiped out many a soldier.

Kitchener visited to see the carnage himself and made the wise decision to withdraw troops before they were all lost. They were transported on ships to the western front. Out of the frying pan into the fire, to use an old cliché.

My great grandfather William Hogg fought with the KOSB in Gallipoli and was wounded in action. On his way to their, the transporter ship “Royal Edward” on which he and is comrades were aboard was torpedoed by a German submarine. He was saved, one of only 600 to survive from the total of 1600 aboard. He returned to Hawick after the war to marry my great grandmother – who was already a war widow.

This song reflects what turned out to be unnecessary or at least avoidable loss at Gallipoli for both sides and many nations. A reflection on the surf and shore that was often blood red.

I first performed the song in Gallipoli in a ceremony to remember the fallen from my home town at Helles Memorial. I also played it as a lament on the pipes at Lone Pine Cemetery in the Anzac sector of Gallipoli.

In a single day, the 12 July 1915, 68 men from my hometown perished. A huge number in a single day from a relatively small town. They are remembered annually by the Callants Club who lay wreaths at the 1514 memorial and the war memorial.

This comes from a true comment made to me in Gallipoli but a high ranking Turkish officer. Our group had decided that since we were spending the week laying wreaths at the graves of our own fallen, we should respect the other side and lay a wreath at the main memorial to Turkish fallen. It was the one occasion where it was thought inappropriate that I play a lament. We simply laid the wreath in silence.

Shortly afterwards a number of busloads of serving soldiers arrived, young recruits who were being taken to pay respect to their own fallen.

We got chatting to them and someone suggested I get the pipes out and play a tune for them. I did this surrounded by soldiers taking pictures and filming on their phones.

Their commanding officer spoke to me and asked about our group and why we were here. After explaining that we were here to honour our local fallen but also decided to honour the fallen from Turkey, he shook my hand and said “I am sorry for your loss – the grandsons of enemies have now become friends.”

That became an additional verse in the song.

The YouTube video of the song ends with a shot of a single thistle among a sea of sunflowers. We spotted this on our last day. It seemed such a poignant symbol of our Scottish fallen on the Gallipoli peninsula- forever remembered.

A reflection of home in a place in the sun.

From the mind of young Churchill

To launch an offence on Ottoman land

And secure the supply routes

With troops on the sand

So the cream of the commonwealth

Sailed with the French for a place in the sun

Where meanwhile the Young Turks were training their guns

Where wave upon wave of men poured

In a tide to be turned like never before

And soon they arrived at the Dardanelles gate

Every eye open yet blind to their fate

Were lying in wait

The shells and the gunfire rained down from the hill

And thousands of corpses lay silent and still

If the bullets dont kill you

Seen at first hand it was Kitchener’s call

Making more martyrs makes no sense at all

Move them all out before everyman falls

A century’s refection remembers those men

Who never set eyes on their homeland again

With grandsons of enemies united as friends

On the Shores of Gallipoli