Continuing the Passchendaele journey that began with the adoption of Calling Doon The Line as the fund-raising anthem for the Scottish Memorial and led to the joint composition of On The Road To Passchendaele for the 90th anniversary. Fast forward to 2017 and the 100-year commemoration of Passchendaele I was asked to compose a new song to mark the occasion and to perform it at a special ceremony to unveil silhouettes of soldiers. Simultaneously I was also involved with the fund raising of the silhouettes.

The face of the campaign was footballer Jimmy Speirs who played for Rangers, Scotland, Clyde, Leeds and Bradford City. He famously scored the winning (and only) goal for Bradford City in the 1911 FA Cup Final. He later volunteered to go to the western front where he fought valiantly alongside his comrades. 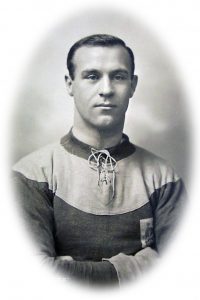 The song was first (officially) performed at the Scottish Memorial near Passchendaele during the ceremony to unveil the new silhouettes  (it was unofficially performed the night before in a local town hall – see Bullets song notes).

It was performed again at the graveside of Jimmy Speirs among a select group of visitors that included Rangers legend Willie Henderson as well as Jimmy’s grandson and great grandson.

The video has been played on match days at Rangers’ Ibrox Stadium and Bradford City’s Valley Parade. I have been truly amazed how quickly this song has taken off, being sung and played by many singers and bands.

I have great memories of playing this song in the Buccluech Centre Langholm with Langholm Pipe band and at Bonchester for the great Henry Douglas with the Drums and Fife. A great night in Belfast also stands out in my mind where it was played with pipes and flute band, complete with goosebumps

The recording involves some of my fellow members of Hawick’s Drums and Fifes band. Cammie Renwick and Stevie Domingo joined me on pipes and flutes.

We all joked whose version of pipes would make the solo part at the end. Sorry guys – I nicked it! Derrick McGeorge and Ross Elliot did a great job on snare drums and band leader Ian Anderson joined in the vocal chorus (band stalwart Colin Thorburn was in New Zealand at the time). I know former band leader Ronnie Nichol, being a keen bluenose would have been delighted to have taken part too.

Also in the chorus are friends and family including Common Riding principals Ali George, Euan Riley (Hib’s biggest fan) and Ronnie Frost. It took a few drams of decent whisky but it was great fun.

One of my favorite comments on Youtube is from Jimmy’s granddaughter which reads;

“Wonderful! This is beautiful. Thank you. Connie Wills (Speirs) – Jimmy’s granddaughter in Canada.“

“We loved it too, we are the direct descendants of Jimmy’s brother Archibald – Coventry“

Jimmy’s song tells the story of a famous person, not obliged to enlist, who volunteered with ordinary folk to serve his country in its time of need.  A reflection of how selfless our forbears were to ensure out freedom.

Down at the drill hall, the boys all wait to sign

Each one determined to join the western line

They swear their allegiance to country and to King

Proud as the football songs they sing

He should be playing football, he’s no need to be here

But Jimmy smiled politely, it’s my duty nothing more

Sing for the boys

Sing for them all

All sent to fight, till the last soldier falls

Sing for the boys

Destined to lie where the red poppies grow

The boys land in Flanders, their journey’s just begun

Jimmy’s swopped his football for a bayonet and a gun

The songs the crowds were singing, still ringing in his ears

As he fought as a loyal volunteer

When the army marches homeward singing songs along their way

Jimmy won’t be with them, where he fell is where he’ll stay

The great war is over, it’s no ninety-minute game