For a long time this has been a favourite song, the one I instinctively play when I pick up the guitar at home for no other reason than to strum and relax. I don’t necessarily set out to write a song about anything in particular. As so often is the case, it just came out. Sometimes the chords come first, or the melody, sometimes the words or a single line that feeds everything else. There is no formula for me, it just happens in its own way, in its own time. My only rule is not to force it.

Here, I was just strumming the guitar and liked the chords and rhythm. The chorus just seemed to appear in my head and come out as I strummed along. The three verses are not connected directly, but they all have a common theme in the chorus that home is the place where you feel safest, where you are most trusting and most trusted, where you are not judged and can be yourself, the real self, the person only your close friends and family really knows.

The first verse is a reflection of the huge amount of travelling I do, the desire to get home, the pleasure knowing that’s where you are heading and the wonderful feeling to finally get there.

“The amber’s in my hand,” is a wee nip of whisky after the plane levels out and after all the modern hassle of passing through airports you sit back and relax. On the lyric sheet that goes with the cd that line is depicted subtly by a picture of Lower East Side, a rather nice blended malt from our local Borders Distillery, though you’ll be very lucky to be offered that on a flight. 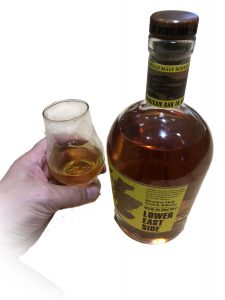 Verse two is perhaps the most personal verse I have written, it’s not meant for anyone in particular. It is how I have often felt when faced with the realisation of insincerity and worse.  I wrote this verse for me – I just needed to get it off my chest. And I did. It’s a great thing about song writing. However you feel, whatever is making you happy, sad, inspired, or even angry, you can pour it out in a song. It’s a bit like therapy. Music is like that, you can lose yourself in it and put two fingers up to whatever irks. It’s a reflection of how I was feeling at the time. Nothing more than that.

Verse three is much deeper. Here I was initially thinking of someone badly wounded in war but I somehow migrated to absent friends, those who knew that their time on earth was short and thinking of being in their own home as their last place on earth and perhaps realising their new home is in heaven. My late aunt Susan, when she realised she was on her way, wrote letters to her children and grandchildren. She told me this herself in her last days.  I found that disturbing and difficult to come to terms with, both the resignation and in the sense that it must have been an extremely painful thing to do emotionally. Yet at the same time I was inspired by the strength of character required to do that and the deep sense of determination to let the most important people in her life, know it.  They will cherish that gesture forever.

There is no deeper reflection than that.

Only one thing occupies my mind

The miles ahead are less than those behind

And I’m thinking of home

We leave the airport and the crowds

And level out above the clouds

The amber’s in my hands

My energy is flowing

Cos I know where I’m going, so

Where I’ll be free

Where I will never be alone

It’s hard to hear the words they spread around

They build you up and then they knock you down

But I’m no longer blind

And I’ve made up my mind

I shouldn’t care what people say

It’s time to turn the other way

I think of what’s been said

The anger’s in my head

But I don’t want to show it

Cos that would only grow it, so

They tell me I will soon be on my way

I’ve tried to write the words I need to say

But the ink well is dry

I’ve no tears left to cry

If that’s the way it’s meant to be

Then that’s as far as I can see

If there’s no way ahead

Living by the hour

Praying for the power, to