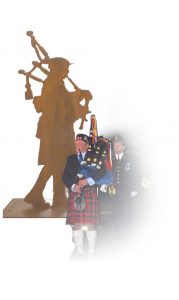 This wee song has taken me on an amazing journey. In 2004 I visited the war graves with a group from my home town of Hawick, led by Ian Landles and Derek Robertson. It began with a “Golden Thread” moment (see song notes for Golden Thread). I was living in Yorkshire and was soon to be returning to Scotland. I visited the Yorkshire show and was chatting to Donald Whillans, an old band mate who was there selling local cashmere and lambswool knitwear for which Hawick is famous. Donald told me he had just booked himself on a war graves trip, something he’d always wanted to do. I had long been fascinated with stories from WW1, though never sure why that particular war held my attention. I went home, contacted the organisers and booked myself on the trip. It left the day after I returned to my home town and as it turned out, Donald wasn’t able to make it. His (legendary) father Chas (Chuck) Whillans and his lovely wife Nan were going in his place.

The trip was a real eye-opener. I was deeply touched by the stories of soldiers, of all nations, in WW1. Being there and seeing the graves and memorials brought it home to everyone on the trip what they went through to preserve our freedom.

I was particularly interested in the pipers who played such an important role in different aspects of the war; playing formal marches as part of pipe bands leading route marches and parades, playing to entertain, playing on the ramparts to rally the troops into battle and playing laments to the fallen.

I wrote the song when I returned home to Scotland. It was first recorded in New Zealand in the studio of my friend, the amazingly talented guitarist Kevin Timm  (Ok – it was his front lounge but it was pretty well set up for recording). The original recording became available on an early digital download site “Scotloads” and from there it found its way across borders.

Derek Robertson posted the song on the Great War Forum where it was picked up by Erwin Ureel, a tireless worker for the fallen. Erwin approached me to ask if they could use Calling Doon the Line as the fund-raising anthem for the raising of a new memorial to fallen Scots in Passchendaele. I felt honoured to have been asked. This led to me being asked, with Major Gavin Stoddart, former Director of Piping at Edinburgh Military Tattoo, to write On the Road to Passchendaele for the official unveiling of the monument.

After the song had received some radio play I was challenged on one of the lines in the song. “And the piper played Scotland the Brave as they waved the boys away.” The challenge was that this was impossible because Scotland The Brave was written in the 50s and therefore could never have been played at the time of WW1.

It continues to amaze me how often Calling Doon the Line has been covered by so many people and bands on YouTube and at gigs and clubs internationally. It has also been recorded and released by North Sea Gas who do a great version that has proved popular.

The original digital version is still doing the rounds and the song is often played at remembrance services.

The new version on Reflections, is laid back in tempo, sombre, reflective (no pun intended) and focussing on the lyrics. I play a whistle in the intro to compliment the wee guitar pick melody I’m often asked about and the accompanying instruments are as I’d imagine a wee group in a wee bar in the WW1 era (a scene Ian Ballantyne commented on when we were mixing the track).

The lament at the end of the track is taken from a video recording of me playing Floors o’ the Forest in the last post ceremony at the Menin Gate at Ypres, Flanders in 2004, on the trip that inspired the song in the first place.  A reflection of an emotional journey.

The boys stood on the platform in 1917

Waiting for a train to Salisbury Plain

They were only in their teens.

A lad to his mother said dinnae fret

We’ll be home by Christmas day

And the piper played Scotland the Brave

As they waved the boys away

And they rallied roond to the piper’s tune

(that was) Calling doon the line

The Sgt Major pushed them hard

They were trained in only days

For to bear the brunt of the Western front

They would soon be on their way

So off they marched, rifles shoulder high

And all at once they sang

Tae the pipers in the band

The thunder echoed through the trench

As the shells abin them rained

And the generals lost a thousand men

For every inch they gained

And the brave young men faced their battle dawn

So proud to do their jobs

And the piper stood in the line of fire

And played them ower the top

When no man’s land fell silent

And they counted all the dead

The victory claimed would disguise the shame

And nothing more was said

And the fallen brave on a foreign field

They gave their very best

And the piper played a sad lament

As they laid the boys to rest

And they rallied roond

That was calling doon