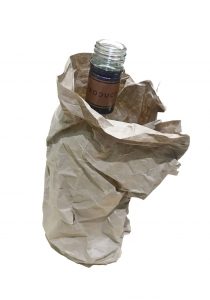 When I was a boy there was a local vagrant by the name of Jock Veich. A homeless person as he would be called now. I can still picture his glazed eyes, mucky auld grey woven coat usually tied with a belt but sometimes a rope round his waist and his stubbled face (though as I write this I wonder why it wasn’t a full beard; he must have had access to a razor from time to time).

Though he was a vagrant, often seen with a bottle in a brown paper bag and to some folk a nuisance, if you mention his name to anyone old enough to remember him, they smile. He is remembered with affection.

In those days alcoholism wasn’t well understood and there was little real help to ordinary folk. Jock was lucky in that the local farming family Scott at Newton farm gave him food and lodgings in their outbuildings and he often helped out at the farm.

I have lost count of the number of times folk have told me their stories about Jock after hearing the song. From an ex prison guard that told me he’d “locked him up many a time” at Saughton Prison where he apparently took care of their roses, stories of him on the farm told by my friend Terry Scott who farms at Newton today, to tales of him as a bright young man with everything to look forward to.

Folk stalwart Shankend Mac, who often sings the song, said to me after hearing it for the first time that “every town has one”. And he’s now sung it in many towns. The late great Viv Sharp, whom I have long admired as a singer, told me he would like to learn it and record it and for a while it remained banter between us. When he took ill he said to me “If we’re going to do that song we’d better not wait ower long son cos’ I’ve no been so well.” We recorded it soon after for The Mosstroopers album. Some, those who remember Viv at his peak, might well say that the recording wasn’t vintage Viv but it’s unmistakable Viv and the slight frailness in his voice at the time fits the subject matter perfectly. It still gives me goosebumps and I will always cherish that recording (and one or two “warm up” recordings that might be uncovered one of these days).

Many singers do great justice to this song at various events and functions and my great friend Gordon Jackson (M.B E – though he’ll kick my backside for mentioning that) has made it his own and I’ll never tire of hearing him sing it.

This song reflects a sad reality that some turn a blind eye to but one that is as prevalent today as ever.

He sits on a park bench, hard and cauld

Wi’ a brown paper bag in his hand

And he swings, as he sings

Of the wonderful things

That he dreams of in far-away lands

But his mind is dazed and his eyes are glazed

And he lives in a world of his own

Where delusion sends him

To wander with friends

While he shivers on the bench all alone

So penny for your thoughts Auld Jock

Penny for your thoughts Auld Jock

Where do you go when all doors are locked to you

Penny for your thoughts Auld Jock

His auld grey coat is as charred as his throat

And its tied wi a belt roond his waste

And the folks hurry by, as he sings to the sky

And the sun warms the stubble on his face

And the auld women “tut” and shake head

They don’t realise, through the grime in his eyes

The young man and the life he once led

When you’re tired lookin doon, on the drunk o’ the toon

And decry him and bloody disgrace

If you can, stop and think, what drove him to drink?

And imagine yourself in his place

For its easy to laugh at the drunk on the haugh

He’s the one with his life on the brink

A pathetic auld man, who’s in need o’ a hand

But has nowhere to turn to but drink