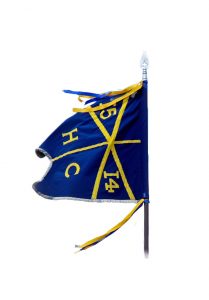 My home town of Hawick is blessed with more than its fair share of singers. There is a tradition in the town of song singing and song writing that goes back centuries. You will rarely find a function on earth where so many of the company can stand and do their party piece in song or verse.  Euan Robson, a young lad who has been singing my songs for years (he sang Calling Doon The Line when he was just a wee laddie – now he is a towering young man) asked me if I would write a new one for him to sing.

Now, when anyone asks me to write a song, it’s never automatic, there’s never an order of preference or hierarchy of songs in my head, the information goes in and the song just comes out by itself. Sometimes it’s really quick, sometimes it takes a long time, some will probably never come out at all. This song was never set to mention the war but I was thinking about the war at the time. It was the time of our local Common Riding where the passion is at its highest and where songs are at the centre of our celebrations. If you have ever been to Hawick you can’t fail to have seen the magnificent statue of a horse and rider in the centre of the town. It depicts a young Callant returning triumphantly in 1514 after defeating a raiding party that was set to plunder the town, a town already devastated by the loss of its menfolk in the disastrous battle of Flodden a year earlier. The young sculptor William Beattie won the commission and built the wonderful 1514 Memorial in 1914 to commemorate the 400th anniversary of the event. He then enlisted to serve in WW1 and was killed shortly before the end of the war. (His story will be told by Ian Landles and myself in Hawick High School on the 2nd October 2018 and a street parade and commemoration will take place on the evening of the 3rd, 100 years since his death.)

I was thinking of a young callant who’d marched off to war. He was thinking of his home town, his home country and his sweetheart left behind. Naturally, Hawick and Scotland were in my own mind but it could be any town, city or country.

I was also thinking of a friend Ronnie Nichol, recently passed away far too soon. He’d been on a war graves pilgrimage with his brother Lyndsay along with two bus-loads of locals including myself and we’d visited the graves of local boys who had fallen in France and Flanders. He was the leader of the Drums and Fifes, the inspiration for the line “and the wind carries tunes on the air“. On Common Riding morning you can hear the sound of the drums and fifes from miles away. It seems to float on the breeze.

I will always remember him playing a lone flute in a field of white Portland gravestones, on our war graves tour on 2010.  Talk about the hairs standing up on the back of your neck.

I could imagine Ronnie sharing the same sentiments of the lyrics. Those things somehow merged in my head and this song came out. I sent a copy of the first demo to his brother Lindsay.

I later sang it at some informal gatherings in the town. At the 2018 celebrations I asked Euan if he had sung the song yet, and he admitted shyly that he hadn’t had the opportunity. Now that it’s made the album Euan I hope you’ll take it up before somebody else claims it!

There are lots of reflections for me in this song.

Where the hawthorn blooms

And the wind carries tunes on the air

There I long to roam

Where my kin calls home

I would trade all I own to be there

To be there with you

When the war is through

I will always remember the day

When you waved goodbye

And you cried as I

There’s a place in my heart

For the only place on earth

I will ever call home

The land of my birth

There’s a place in my heart

Where her flag forever flies

And I swear I will love her

When the owl takes flight

In the still of night

He can sense more than light

When you march alone

And your heart seeks home

But the road is long

To where I belong

Though my heart’s still there

I wish I had ne’r marched away